S’ARCHITTU: reachable on foot with a short walk is one of the most enchanting places in Sardinia. The unmistakable and fascinating natural arch of white sandstone carved out over time by the sea, protects and makes unique a small and charming beach where one can spend moments of pure relaxation surrounded by a breathtaking view. Ideal for snorkelers from beginners, to the most daring. There is even the chance to dive from many different heights. It has inspired poets and directors, and has been the set of several films including the latest revelation “The Man who bought the moon” by Paolo Zucca.

IS ARENAS: just 5 minutes away by car, famous for its sand dunes among the largest in Italy, with its 6 km and over is one of the largest beaches in the area. On sunny days with no wind or wind from the east, it has crystal-clear waters all the way to the bottom of the seabed, combined with its white sand, will give you an unforgettable day. Just as the spectacle that nature offers on days of strong mistral is also unforgettable (it is forbidden to enter the water because of strong currents) and it is worth observing from a safe distance.

IS ARUTAS: just over 30 km away, with the unmistakable sand made of small quartz grains similar to rice grains, in 2013 it was included by the Vanity Fair Travelers experts in the list of the most beautiful beaches in the world. Unmissable! How to get

BEACH OF SAN GIOVANNI DI SINIS: situated on the western side of the beautiful Sinis Peninsula, dominated by the Spanish tower dedicated to the Saint, right next to the unmissable archaeological site of Tharros, this beach with its crystal-clear sea and unforgettable view is only half an hour away from Lughente sea. How to get

SA MESA LONGA: in Italian “the long table”, it takes its name from the natural sandstone barrier located a few tens of meters from the shore that protects it from the waves, making it a natural pool even with the mistral wind. This “wall”, easily reachable by swimming or even walking at low tide, gives those who climb on it the feeling of walking on water. Clear sea in all shades of blue, reddish sand made of shells and pebbles and nature at 360 ° complete the picture. Just 20 minutes away.

COMPOLTITU: for the more adventurous, a small pearl of white sand and crystal clear sea, set between beautiful headlands and breathtaking scenery. Just over 40 km in the direction of Bosa. How to get

Let pampered by this relaxing and recreational atmosphere for your body and your soul!

A mixture of mythology and legend, hidden villages and magical sites mark the history of an island that goes beyond the sea and tells about itself through emotions and suggestions.

Let yourself be carried by hospitality and taste visiting the local wine & food festivals of the area.

Some local events are listed below:

Do not miss the Carnival parties between February and March with the typical and suggestive masks from Bosa, the choreographic horse race “Sartiglia” in Oristano and the pair horses race in Santu Lussurgiu. 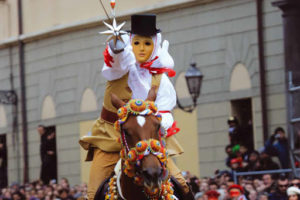